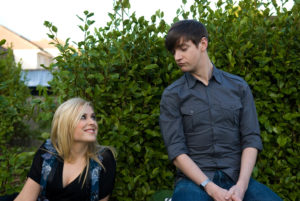 Steve (Emmet Kirwan) is unsure of what he wants out of life. It’s not that he doesn’t like living in Tallaght, he just doesn’t want to settle down and live his parents’ life just yet. Steve feels somewhat removed from his friends and family in the Springfield estate, and often observes the goings on around him with a sense of detached bemusement, but buries all this beneath his busy social schedule of club-hopping with his mates and partying in the Dublin mountains. Sarah (Charlene Gleeson) has always seen through Steve’s mad-lad routine, and knows he is smarter than he lets on. Recently Steve feels like he might like to go travelling, but he’s fairly sure Sarah wouldn’t come with him. .

Sarah is Tallaght through and through. Since dropping out of school after transition year, she has been working as a hairdresser in “Classy Cuts”. Despite not really enjoying school, Sarah has real street smarts, and a wicked tongue that can put anyone in their place.

Over the course of the series, Steve and Sarah clash over what their future together holds. Steve encourages Sarah to widen her horizons beyond the borders of Tallaght, but it soon becomes clear that a trip to the Canaries and a messy weekend at the Electric Picnic may not have been the best first steps. Meanwhile. Sarah struggles to help Steve appreciate the place he comes from and the people who love him. Amidst the madness of Steve’s drug-fuelled mates and Sarah’s aggressive, GHD-wielding co-workers, can their relationship survive?